Drawing lessons and a warning from my younger self

I have a confession to make: I voted for a billionaire.

After all, he is a very, very successful businessman. He promised that during his presidency, everything would be great – a balanced budget, American jobs returning from Mexico, a do-nothing Congress put in its place, lollipop fields and unicorn-drawn carriages for everyone.

It’s embarrassing to admit, but it’s true – I voted for Ross Perot.

Oh, did you think I meant Donald Trump? That’s understandable. They’re not all that different.

Ross Perot is the self-made Texas billionaire founder of Electronic Data Systems. During his first self-funded presidential campaign in 1992 (he ran again in 1996), he was not yet at his current worth of $4.3 billion, but still a billionaire at least twice over. He opposed harmful globalization and supported the EPA, both of which I can get behind.

What induces my rearview discomfort are Perot’s cringe-worthy statements such as calling Vietnam Veterans Memorial architect Maya Lin an “egg roll” and jobs moving to Mexico as a “giant sucking sound”. Like Trump, he was fond of accusing the media of “gotcha” stories and launched an independent investigation of a government bigwig (Perot’s target was a Defense Department official rather than the president).

Perot allegedly pressured campaign workers to take “loyalty oaths”, reminiscent of The Donald calling upon Florida ralliers to raise their right hands and pledge votes to him. Although tame in comparison to Trumpian warnings of riots and threats to sue everyone with a pulse, Perot could talk tough; he said opponents in one debate should know, “I’m not playing Lawrence Welk music here tonight.”

Yes, instead of one of the cool kids who rocked the vote for a sax-playing Democrat in shades, I chose the big-eared Lawrence Welk guy. (If you’re too young to remember Welk’s show or Bill Clinton on MTV, save me the pain and just Google it.) 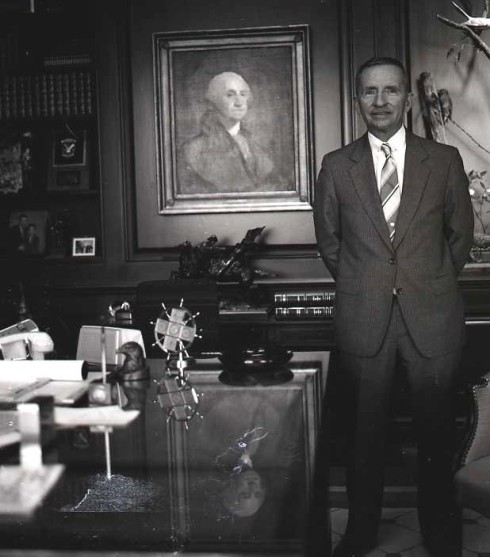 George Washington, above, with Ross Perot.

Any of this sound familiar? Because even though things seem very different now – especially in communications and technology – the Trump “revolution”, or “angry mob” or whatever you want to call it, is driven by the same underlying desires that convinced a college student in Boston to cast a Perot ballot. We want our country to be Numero-Uno awesome and many believe an outsider needs to step into the politics-as-usual maelstrom to reach nationalist euphoric heights. It’s the same thinking that garnered Perot nearly 19 percent of the popular vote, the most by a third-party candidate since Teddy Roosevelt.

And that’s why the Perot example should be instructive, especially for newly minted voters being courted by someone outside the political mainstream, a businessman whose success is considered a harbinger of magnificent things for America and its longing to be great, or, in Trump’s case, “great again”.

Look at some young conservatives interviewed in Cosmopolitan. (Clearly Cosmo is not a deep font of political wisdom, unless you’re wondering how to seduce a man of voting age in 10 easy steps. But I saw the link on Yahoo News.) In an article titled, “3 Female College Students Explain Why They Support Donald Trump”, Cassidy, Anna and Julie offer arguments oft-fondled by Trumpites.

“He’s not rehearsed. But he is a very special businessman who is willing to work for our country, which is a big deal, that he wants to work for us and not just for himself,” says 18-year-old Julie.

Anna, 22, explains, “I support Donald Trump because I feel like he is a doer and I feel like if we keep putting politicians in the White House, regardless of party, we’re just going to get the same result, you know?”

“I really support Donald Trump because he comes from a background where he turns nothing into something. And I also really appreciate the fact that he’s not afraid to put his foot down and tell people what is exactly on his mind,” says 18-year-old Cassidy.

In contrast to Trump’s professed fondness for those with less schooling (“I love the poorly educated”), these are women enrolled in higher education – Campbell University, Spring Hill College, and the University of South Carolina – and engaged enough to hold positions as campus, regional and even national youth leaders stumping for Trump.

As with myself and Perot, this could be a case of otherwise intelligent young people relying on optimism more than reason, a desire to seek out a doer, a very special businessman, someone who turns something into nothing. But maturation breeds skepticism, and in a 2036 presidential campaign, when a candidate tells people what patently offensive statements are exactly on his mind, Cassidy’s response may no longer be, “I don’t think he really meant them in, like, a harmful way or anything like that.”

In the here and now, to these ladies I say – really? Do you truly believe your own line of faux innocence purporting Trump to be misunderstood by everyone who recognizes the hatemonger behind the coyote grin? Because even while I try to give you a quasi-plausible out – i.e., I was too young to realize the orange-faced Music Man was selling River City a bogus horn section – even my impetuous, Perot-supporting self could not have engaged in that level of delusion.

In 1992 I voted with ill-considered optimism, and my hope is that today’s young people – whether angry student leaders or annoyed zombie followers – will not also cast a vote that, years from now, has them admitting they were too easily impressed by a very, very successful billionaire.