Posted on September 23, 2017 by slothonline Posted in D. Allan Kerr

Just to be clear, Robert Mueller III doesn’t need anyone to fight his battles for him.

Time magazine once recounted an exchange during his tenure as FBI director where one of his deputies advised Mueller to tread carefully in the political minefield that is Washington DC. 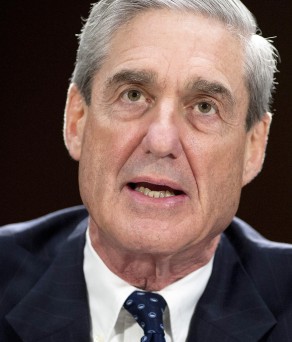 Mueller reportedly looked his deputy in the eye and retorted, “I don’t bruise easily.”

Mueller is an ex-Marine captain. He attended the Army’s Ranger school and jump school, and commanded a rifle platoon in Vietnam. He took a bullet to the leg in April 1969 and was awarded the Bronze Star with Valor, the Purple Heart, the Vietnamese Cross for Gallantry, and two Navy and Marine Corps Commendation Medals for his service.

He knows how to get a job done under fire.

Earlier this year, when Mueller’s special investigation started getting a little too close for comfort, the Failing President of the United States tried to besmirch the prosecutor’s efforts.

Mueller’s probe into links between last year’s presidential campaign and Russia is a “witch hunt,” he said. He claimed Mueller and his team had conflicts of interest, claimed Mueller was too chummy with fired FBI director James Comey to be impartial.

Some folks suspected Chicken Liar was laying the groundwork to fire Mueller as well, to keep the prosecutor from unearthing anything embarrassing.

Members of Congress, representing both parties, actually initiated legislation to thwart such action. Republican Sen. Lindsey Graham warned firing Mueller “could be the beginning of the end” of the current administration.

Basically there was such a backlash Chicken Liar, as he tends to do when confronted, backed down. The attacks petered out – no doubt due in part to the remarkably impeccable reputation of Mueller, who headed the FBI for 12 years after 9/11. There was simply no dirt on the guy.

But now, according to media reports, Mueller is seeking documents directly from the White House, related to specific actions by Chicken Liar. Now it’s getting serious. And if the Failing President of the United States feels he has reason to panic, it’s very likely he will seek to assassinate the character of the guy investigating him.

If that happens, there are some things to keep in mind.

Mueller’s Bronze Star citation from the Vietnam War describes the following actions in 1968 after his platoon came under heavy fire in the Quang Tri Province:

“With complete disregard for his own safety, (Mueller) then skillfully supervised the evacuation of casualties from the hazardous area and, on one occasion, personally led a fire team across the fire-swept area terrain to recover a mortally wounded Marine who had fallen in a position forward on the friendly lines.”

Mueller did not have to serve in the jungles of Vietnam. Before joining the Marines he graduated from Princeton in 1966 and then earned a master’s degree from New York University.

Before college, he attended New Hampshire’s own St. Paul’s School in Concord, where he was named the top athlete in 1962 and captained the lacrosse, soccer and hockey teams – the latter including future Senator and Secretary of State John Kerry.

Mueller famously decided to join the Marines after his Princeton lacrosse teammate David Hackett was killed in action in Vietnam in 1967. “Many of us saw in him the person we wanted to be,” Mueller once said. “He taught us the true meaning of leadership.”

For those keeping score at home, this is the same war Chicken Liar – who describes himself as “the most militaristic person there is” – aggressively avoided thru five deferments.

Mueller reportedly considered making a career of the Marine Corps, but ultimately pursued a law career instead. He added a law degree from the University of Virginia to his already impressive resume, and could have remained in the private sector to make a whole lot of money. On occasion, he’s done that.

Before taking the reins as FBI director in 2001, Mueller had to take some time to beat prostate cancer first. Then he was sworn in to his new post on 4 September – one week before the 9/11 attacks.

He is credited with revamping the FBI during the ensuing war on terror, and even though he was appointed to a 10-year-term by George W. Bush, he did such a good job he was asked by Barack Obama to stay on for another two years.

Again, for those keeping score at home, Chicken Liar was hosting a dopey reality TV show over this same period of time. In fact, for the first 70 years of his life, he’s really served no one but himself – and one could argue this is an ongoing trend now.

As I said, Mueller can certainly stand up for himself. He’s survived bullets, cancer, terrorists, gangsters, and New England hockey.

But Chicken Liar has demonstrated repeatedly throughout his life an eagerness to smear people who are superior to him in just about every other way. And if he winds up feeling cornered by this Russia investigation, it’s going to get ugly.

So standing up for Mueller isn’t really just for Mueller – although he certainly has earned whatever support the country can provide as he completes his task. It’s even more important for the country.

It could be an opportunity to show we won’t be fooled when it comes to a clear-cut choice of right and wrong.

D. Allan Kerr finds it ironic that Chicken Liar finds himself in the crosshairs of the genuine Tough Guy he pretends to be.