Posted on August 25, 2018 by slothonline Posted in D. Allan Kerr

On May 17, 2017, Robert S. Mueller III was appointed special counsel to investigate Russian interference in the 2016 U.S. election.

By May 18th you can be sure an extremely nervous Donald Trump was pushing for any kind of smear he could find on the former FBI director.

Think about this for a moment. Imagine if someone with the resources of the entire U.S. government at his disposal tried to find embarrassing information from your past. Maybe not even something criminal – an offhand remark during a private conversation, an ill-advised e-mail, a line from a speech two decades ago, a physical gesture which made someone feel uncomfortable.

And imagine how infuriating it must be for someone as sleazy as Donald Trump to fail at finding anything to nail against this guy, even 15 months later.

Trump can pretend Mueller is “disgraced and discredited,” as he did this week, but as is typically the case he has nothing to back his words. It’s yet another alternate reality in his Bizarro universe. It’s a big, fat lie. 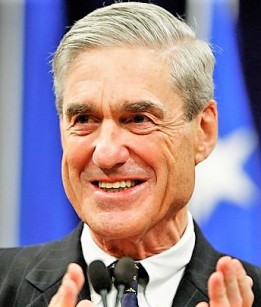 Much to his critics’ chagrin, Mueller has handled himself with absolute class and professionalism throughout this process. You’ve seen no rambling press conferences or semi-literate tweets or barely coherent interviews from the special counsel. In fact, you’ve barely heard a peep from Mueller – except by way of the indictments he’s parceling out. As a result, even Fox News polling has his approval rating at 59 percent – 14 points higher than Trump’s.

As much as he touts himself as a deal maker, Trump would appear to be the worst poker player imaginable. With Mueller, however, there’s just no telling what he has up his sleeve, which is why Trump is unraveling now at such an alarming rate.

No, if anyone has been disgraced and discredited, it’s our current commander-and-thief. If he thinks Crooked Hillary is an accurate nickname for the 2016 Democratic presidential nominee, then he should be dubbed Donnie Corruption.

Imagine if Mueller had done something cowardly like dodge the draft during Vietnam – not out of principle but because he didn’t want to serve his country. You can be sure Trump would be trumpeting about it today.

But turns out Trump was the guy who avoided the military by any means necessary, while Mueller volunteered for the Marine Corps after completing his Ivy League education. Then he commanded a rifle platoon in a battalion known as “the Magnificent Bastards.” He was decorated multiple times for courage under fire, including the Purple Heart for wounds suffered in combat.

Mueller, however, has been married to the same woman for more than 50 years.

Imagine if Mueller had a lifelong record of failure prior to his current appointment.

Like maybe creating a school claiming to teach people success in business, and then not only seeing the business school go OUT of business but being forced to pay $25 million to former students felt swindled.

Or if his business had to file bankruptcy at least four times within a 20-year period. Or if he managed to almost single-handedly lead an entire professional sports league into extinction. I mean, Trump – or anyone with a gift for ridicule – could have a field day with a loser like this.

But the truth is, after serving his country with honor in time of war, Mueller continued to serve on the home front as well. He served from coast to coast, literally, as a U.S. Attorney, an assistant Attorney General, and finally, one week before 9/11, was named director of the FBI.

He was a primary architect of our “War on Terror” under George W. Bush and did such a great job he was asked by Barack Obama to stay on for another two years after completing his 10-year term. In 2004, the former Marine captain – who attended Ranger and Airborne Schools as part of his military training – was inducted into the Army’s Ranger Hall of Fame.

In 2016, the former Marine captain was presented with the Sylvanus Thayer Award by the United States Military Academy at West Point. The award is given annually to a U.S. citizen whose service to country exemplifies West Point’s motto of “Duty. Honor. Country.”

Mueller said something of particular interest that day. In discussing integrity, he stated:

“There will come a time when you will be tested. You may find yourself standing alone, against those you thought were trusted colleagues. You may stand to lose what you have worked for. And the decision will not be an easy call.”

Seven months later, he was appointed to his current post as special counsel.

As the showdown between Captain America and Cadet Bone Spurs approaches high noon, I hope folks will keep these words in mind.

D. Allan Kerr has to wonder why Donnie Corruption would pay $130,000 hush money to a person he never slept with.