Posted on January 8, 2017 by slothonline Posted in D. Allan Kerr

It should come up if you just type in “Obama Eulogy” on YouTube, but specifically you’re looking for the one he delivered at the June 2015 memorial service of Rev. Clementa Pinckney.

If you have the time, go ahead and watch the entire thing – it’s a remarkable, stirring commentary on race relations in America, and a tribute to a pretty special man. But if not, then fast forward to about the 34th minute of this eulogy, when President Barack Obama talks about grace.

Keep in mind that he is presiding over the service of an African Methodist Episcopal pastor who was gunned down during a prayer meeting, along with eight other African Americans, in a Charleston, South Carolina, church.

Keep in mind that he is addressing a community almost shattered by this unimaginable horror, perpetrated by a psychotic punk whose goal was to ignite a race war.

At around this 34th minute, Obama speaks about the grace of an “open heart,” and says “If we can tap that grace, everything can change.”

He pauses for moment and says quietly, almost as if pondering the concept, “amazing grace.” He pauses again before he repeats the phrase – “amazing grace” – and for the longest moment just stands there at the podium, in front of a packed, grieving house, so quiet you can barely hear anyone breathing.

Then, in a forceful but hardly melodic tone, the President of the United States starts to sing. 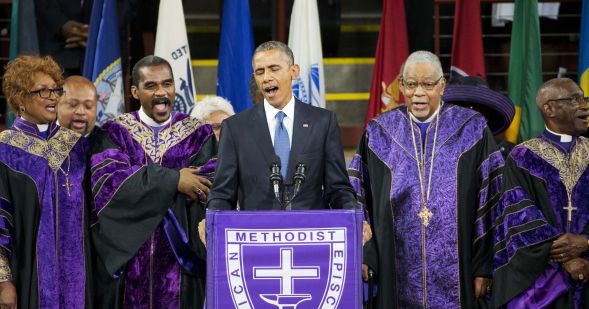 When the song concludes and the people applaud wildly, Barack Obama calls out, “Clementa Pinckney found that grace!”

And the crowd shouts its affirmation.

The crowd shouts its affirmation.

He goes on to name all nine of these God-loving individuals senselessly gunned down in a house of faith, the mourners in attendance roaring on their feet, celebrating the lives of their brethren now rather than despairing over their loss.

He concludes by booming out: “May God continue to shed His Grace, on these UNITED States of America!”

And the explosion of joy in the wake of this brutal tragedy is astounding. It is very likely the most amazing presidential moment I’ve ever seen.

Forget how it puts to shame every conspiracy idiot who ever tried to advance the notion of Obama as some sort of Muslim mastermind planted in the White House to subvert America. Set aside the contrast between the message of unity he conveys here and the divisiveness promoted by his opponents.

The scene has all the earmarks of spontaneity – of a moment realized and seized upon by a man of almost supernatural instinct and sensitivity. But hey, for all I know it was brilliant theater planned in advance.

In the end, it doesn’t matter. Obama went to a city that had been devastated by the ugliest hate imaginable, which could easily have been broken by despair, and managed to lift up that entire population. He was able to take an act designed to tear a community apart, and use it to bring people closer together.

I can’t think of anyone – certainly no other politician – who could have done what Obama did that day, in such a powerful way. I’d almost call it magical, but I don’t want to get too carried away.

I’m not going to say the Obama presidency was without its blemishes. As much as I liked him in 2008, I frankly didn’t vote for him that year because I didn’t think he had enough experience. (And because I’m a big John McCain fan.) In the years since I have on occasion been frustrated by his policies, especially in regards to foreign affairs.

But for all the imperfections of the current health care system, he brought to fruition a concept many had previously thought unwieldy; as a result, millions who were uninsured now have coverage.

And although Democrats have done a curiously lousy job of touting successes against terrorists, there have been significant inroads there as well.

Almost as importantly, however, throughout his two terms in office, Obama repeatedly managed to make me feel good about this country.

The service in Charleston is just one of the more inspiring examples, but there are numerous other moments – some of them quite small.

I’ve seen footage of the Commander-in-Chief boarding a helicopter and, probably distracted by heavy issues of the day, neglecting to acknowledge the salute of a young Marine standing his post near the ramp.

Obama goes up the ramp, enters the aircraft, almost immediately realizes what he’s done, and goes back down the stairs. Then he approaches the somewhat startled Marine and shakes his hand in appreciation of his service.

I recall just a few months into his presidency in 2009 when a small band of Somali pirates held American sea captain Richard Phillips hostage. I still had doubts about our new President at the time, and seeing these ragged pirates in their little lifeboat hold the United States Navy to an apparent standoff confirmed my worst fears about his inexperience.

Then he gave the authorization to use lethal force, and brilliant Navy sharpshooters took out three of the captors at the same time, freeing Phillips.

You might remember that Somali pirates were something of a scourge on the high seas in those days. I don’t hear too much about them anymore.

Eight years after his election, I still sometimes find it astounding that America elected a President named Barack Hussein Obama, who looked nothing at all like any of those who had held the office before him.

Time will provide the measure of his legacy, but I think it’s fair to say he’s going to be missed by a lot of us.