America can sleep in peace this week, knowing Jorge Garcia is no longer in our midst.

Sorry, it appears he doesn’t have a criminal  record. I just assumed he would have that kind of resume because, well, his name is Jorge Garcia. And he’s Mexican. And the current White House has said dangerous criminals from other countries were going to be the primary focus of these deportations. 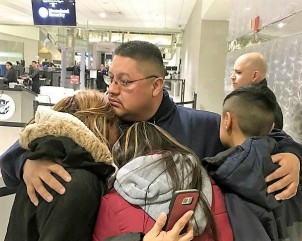 So apparently there was some confusion somewhere.

Garcia, upon further investigation, is a guy who worked in the landscaping business, paid his taxes, got married, raised two kids and kept his nose clean. His biggest mistake was being born too early – and in another country.

Garcia, according to media reports, was brought to America from Mexico at the age of 10, by a family member. Having lived in the United States for nearly three decades, he’s been sent back to a country he doesn’t even know anymore.

His family says they’ve tried for years to legalize Garcia as a U.S. citizen, spending more than $100,000 in legal costs along the way. A judge originally ordered his removal back in 2006, but the father of two appealed the ruling thru the courts and was granted stays during the Obama administration.

Then in November he went in for his regular check-in appointment with Immigration and Customs Enforcement (ICE.)  He was detained and informed he was being sent out of the United States immediately. Only after his U.S. congresswoman Debbie Dingell intervened was Garcia permitted to spend one last holiday season with his family – only to be deported on the day set aside to honor civil rights leader Martin Luther King Jr.

Under current laws, Garcia is a couple of years too old to qualify for DACA, or Deferred Action for Childhood Arrivals, the so-called Dreamers legislation protecting immigrants brought to this country illegally as minors. He asked ICE to delay his deportation in case the age range is expanded under new DACA legislation, but the agency refused.

Now it could be another 10 years before Garcia is permitted to return to the U.S.

No doubt it would be better for the country to ship out murderous drug-dealing gangsters rather than individuals who follow procedure, but why go thru the trouble of tracking down criminals when you can just nab folks like Garcia who show up at ICE offices by appointment?

Friends say Garcia’s never even gotten a parking ticket, which I happen to think is unlikely for anyone who has lived in the U.S for 30 years. But while ICE officials described him as “an unlawfully present citizen of Mexico,” it seems safe to say he’s been a law-abiding citizen otherwise.

Some will argue this point, saying Garcia broke the law simply by remaining in this country with his wife and children, who are U.S. citizens. But let’s take a glance at the other side of the fence, so to speak.

Former Arizona sheriff Joe Arpaio made a name for himself by housing inmates – often suspected illegal immigrants – in tent cities he personally described as “concentration camps.” Arpaio himself was ultimately convicted of criminal contempt for ignoring a court order prohibiting racial profiling. He was later pardoned by Donald Trump.

But MSNBC’s Ari Melber pointed out in the interview Arpaio, too, had violated the law, and is now basically seeking a promotion by running for a seat in the U.S. Senate.

“Why do you want to go to the Senate and write laws if you wouldn’t follow a judge’s order to uphold them?” Melber asked during the interview.

The 85-year-old Arpaio denied any guilt in that case – and seemed quite surprised to learn he had actually admitted guilt by accepting Trump’s pardon. He said he didn’t want to “get into the politics” of his conviction and then complained about his treatment by the judge who issued the order – totally missing the irony of his previous statement regarding the complaints of his former prisoners.

Arpaio has long been a poster boy for racially-tinged animosity toward illegal immigrants. Now Garcia, a big teddy bear of a guy, has become the face of the very human consequences of this policy.

News footage of his heartwrenching Detroit airport farewell with his sobbing family – including a 15-year-old daughter and 12-year-old son – aired all across the country last week. Rep. Dingell has said Garcia’s wife will be her guest at the upcoming State of the Union address in Washington D.C.

These are the people Trump is trying to hold hostage in exchange for funding of his idiotic and very expensive wall.

Arpaio violated the law, received a presidential pardon, and is now a U.S. Senate candidate. Garcia violated the law – by wishing to remain with his family in the greatest country on Earth – and was deported to a place he doesn’t really know.

One thing I don’t understand – perhaps a complex issue for another day – is why it was so hard for Garcia to obtain U.S. citizenship when he grew up here, had no record of arrest, married a U.S. citizen, and had children who are U.S. citizens. I have no familiarity with the legal path to citizenship but there obviously needs to be a simpler road for these kinds of individuals.

But for now the question I want answered is how the deportation of Jorge Garcia made America a better country.

D. Allan Kerr’s great-grandparents came to the USA from Newfoundland a century ago, but it appears things were much simpler then.