When our government loses track of 1,500 immigrant children, TV stars go off on racist rants and investigators have to dig into political corruption, of course it makes sense to turn the conversation to Mookie Betts of the Boston Red Sox.

“The one constant through all the years has been baseball,” James Earl Jones rumbles in the classic film Field of Dreams. “It reminds us of all that once was good and that could be again.”

Unfortunately, big-time sports media has a tendency toward laziness. They collectively glom onto athletes who are already overhyped or who promote themselves thru antics rather than performance. As a result, athletes who go about their business of everyday brilliance are often overlooked.

So as we roll into summer, and as baseball prepares to take center stage from hockey and basketball, I’m compelled to call the casual sports fan’s attention to the young man playing right field for the Sox. You may see things you’ll never see again.

Mookie Betts, at age 25, has hit three home runs in a single game on four separate occasions. That’s already more than any player in the history of a team featuring some of the greatest sluggers of all time – Ruth, Foxx, Williams, Yazstremski, Rice, Ortiz. He’s the only major league player in the history of the sport to accomplish this feat before his 26th birthday. 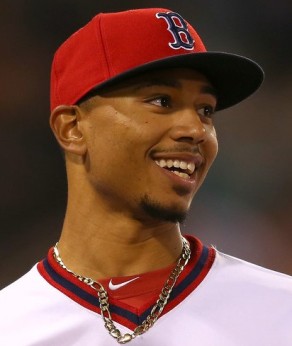 Until an injury derailed him this past week, Mookie was the leading home-run hitter in baseball. What’s amazing about this is Mookie stands about five-foot-nine and weighs maybe 175 pounds.

By comparison, Giancarlo Stanton of the New York Yankees, generally regarded as baseball’s pre-eminent slugger, is six-foot-six and weighs 245 pounds. If Mookie were to sit on Stanton’s lap he’d look like a ventriloquist’s dummy.

Mookie is a leadoff hitter. He’s supposed to get a lot of hits, steal some bases, and then let the big muscleheads batting behind him drive him to home plate. The scary thing is, he’s doing that, too.

As of this writing, despite his recent injury, Mookie is leading the league in batting (a robust .359 average), runs scored and slugging percentage. He’s second in both stolen bases and home runs, which is pretty amazing when you think about it. With Mookie, the home runs are essentially a bonus to what he already brings to the field.

In a game a couple of weeks ago, Mookie failed to hit a home run, but he did rap out three hits, steal three bases, scored two runs and made a very nice catch in the outfield. There aren’t many people on the planet who are a genuine threat to either hit three home runs or steal three bases in a single game.

The kid helps his team win in so many ways it’s scary. Now in just his fourth full season, his dazzling play in the field has already brought him two Gold Gloves for providing the best defense in his position.

There are all kinds of metrics used now to calculate a player’s value to his baseball team and frankly I don’t understand half of it. (WAR, to me, is something we just reflected upon during Memorial Day.) But you don’t need formulas to appreciate a ballplayer’s greatness – you just need eyes.

My favorite baseball player, from his rookie season six years ago, is Mike Trout of the Los Angeles Angels.

Never in my life have I seen such a combination of power, speed and athleticism. This is a kid who can hammer a 500-foot home run, swipe 40 stolen bases in a season, and make a catch in center field that’ll leave your jaw hanging.

At this early stage of the year, I would have to say Mookie is very possibly out-Trouting Mike Trout. (And while we’re on the subject, as much as I love Trout, my vote for the Most Valuable Player award he won two years ago would have gone to Betts.)

I’ve never heard of Mookie engaging in rude or especially obnoxious behavior. He has a humble demeanor and a quick grin.

He is also, believe it or not, an amazing, professional-level bowler. Just last year he rolled a perfect 300 game in the World Series of Bowling.

As a kid I remember when Fred Lynn and Jim Rice first came up to play for the Red Sox. New England went nuts for these guys that season of 1975 and Rice became my boyhood idol, but it was Lynn who drew the comparisons to Joe DiMaggio. He wound up the first player ever to win Rookie of the Year and MVP honors the same season.

As the cliché goes, those were simpler times. We didn’t have all the cable and Internet and social media distractions of 2018, where there’s so much competition for our attention.

But with the Bruins and the Celtics both finishing their dramatic seasons, maybe Mookie will get the spotlight he deserves. I don’t expect him to continue his power surge all season long – although it’d be a kick to see a leadoff hitter as home run champion – but it wouldn’t surprise me if he puts on a show for the ages.

As baseball is the most superstitious of American sports, I realize I risk jinxing everything by even calling attention  to the guy. But dammit Mookie Betts deserves to be a household name, in our corner of the country at least. And we could use the diversion.

D. Allan Kerr will someday share the story of how he helped the Red Sox win three World Series championships.