More than a year-and-a-half ago, almost half of America’s working class put their faith and hope behind a man who promised the world would be a better place with him as president of the United States.

“I am your voice,” Donald J. Trump assured attendees of the 2016 Republican convention.

Personally I couldn’t imagine how a guy who’s never known anything but the soft womb of privilege would have a clue about the lives of people struggling to make their next mortgage payment. But a lot of folks took him at his word.

Now, with mid-term elections coming up this year, he’s asking for voter support again. This time, however, people can consider more than just wild promises. Now there’s a record available for review.

Due to space constraints, we won’t address Trump’s clumsy efforts in foreign relations, his capitulation to North Korea, the acquiescence toward his Russian sponsors, the mishandling of children at the border. For now, let’s just review the way Trump’s looked out for the working man. The little guy.

For the record, I tend to bristle at the term “working class,” since it can apply to pretty much all income levels. But for this exercise, let’s say the phrase represents the financially struggling lower and middle classes of America.

Trump’s disdain for this bloc was apparent when he tried to ram thru the repeal of Obamacare, with no regard for the millions of Americans who would have been left without health coverage. It was stunningly clear Trump had no idea what was in the bill, and didn’t care. He just desperately wanted a “victory” – any victory – even at the expense of our most vulnerable citizens. 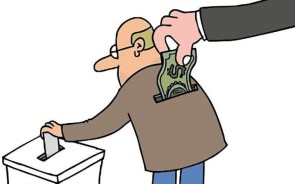 He followed that up with tax cuts expected to add as much as $1.9 trillion to the national debt over the next ten years. Let’s be clear – this was literally an effort to buy your vote.

Didn’t you wonder why tax cuts were so necessary to boost the economy when Trump was boasting the economy had already surged to record highs?

While the cuts did allow some taxpayers to keep some of their income – for now – most of that money went to those who already have most of America’s money. The true cost of these cuts will be felt with the next step of the GOP plan.

Republicans are already working on a budget targeting additional cuts – to Medicare and Medicaid. You probably won’t hear them talk about it much ahead of the mid-term elections, but this is part of the 2019 budget plan. They want to cut Medicare by more than $500 billion and Medicaid and related programs by $1.5 trillion. See, our taxes pay for these programs, so if tax revenue decreases we have to make up the difference somewhere else.

So once again, Americans struggling the most will have to pay the price for the rich folks who most benefited from the tax cuts.

Now Trump is asking American workers and farmers to exhibit patience and patriotism in dealing with the repercussions of his trade wars with – well, everybody. What farmers really need to ask themselves is how much of his own wealth is Trump putting at risk?

As much as he rails at companies like Harley-Davidson for doing some manufacturing overseas, both Trump and daughter Ivanka have long histories of selling products made in China and other overseas countries. I’m curious to know if Trump’s tariffs have targeted any of the items sold by his companies.

Now he’s seeking to import more than 60 foreign employees to work at Mar-A-Lago for the upcoming season. Supposedly Trump has to resort to foreign workers because there aren’t enough American cooks and servers to fill the vacancies.

Really? There aren’t 60 kids across the greatest country on Earth who would jump at the chance to work at Trump’s Florida paradise? Doesn’t sound plausible, but it makes for cheap labor.

None of this should be a surprise – Trump has always been notorious for not paying workers under contract, or his own employees for overtime.

And normally I wouldn’t hold the president of the United States responsible for rising prices at the gas pump, but back in 2012, private citizen Trump tweeted “Gas prices are at crazy levels – fire Obama!”

Now, I’ve long had this habit of stashing gas pump receipts above the visor of my car so I can track the roller-coaster price changes. For the sake of accuracy, I recently reviewed only the receipts from BJ’s Wholesale Club, where I purchase most of my gasoline.

During 2016, the last year of Barack Hussein Obama’s presidency, prices there usually hovered at or below $2 per gallon. As recently as March 2016, BJ’s was charging just $1.60 per gallon.

Trump promised during his campaign to “drain the swamp” of Washington DC, and I remember thinking this would be like sending in a sewer rat to rid the house of cockroaches. Sure enough, the people who’ve probably benefited the most from his presidency are the ones Trump claimed were going to help him with that damn swamp.

All across the country this year, Trump and others of his ilk are going to tell working-class people they understand working-class problems. Right here in Maine, the GOP will try to convince voters that hedge-fund millionaire Bruce Poliquin, who made his fortune in New York and Chicago, is more “in touch with the common man” than Democratic opponent Jared Golden.

One problem with that strategy – Golden is an ex-grunt, a former Marine corporal who volunteered to carry a rifle in Iraq and Afghanistan after the 9/11 attacks. He had to hold down three jobs to make ends meet when he returned home, and overcame post-traumatic stress related to his combat experiences.

Golden is now the assistant Democratic leader of the state’s House of Representatives, and his party’s nominee for the 2nd Congressional District.

As an incumbent Republican congressman, Poliquin once tried to duck into a women’s restroom to avoid questions about repealing Obamacare.

I’ll leave it to you to figure who has keener insight into the problems of Maine workers and how they should be fixed.

I don’t blame voters for wanting to believe Trump, but they should perform their due diligence. A little research would have shown the former dean of Trump University had little more than contempt for people he always considered “small potatoes” – until he needed their vote.

Something to remember when he and his minions pledge to be your voice in November.

D. Allan Kerr wants to know where he can get one of those Baby Huey-type balloons floating in London this week.