Posted on January 13, 2019 by slothonline Posted in D. Allan Kerr

More than three years ago, the documents required to transfer ownership of John Paul Jones Memorial Park from the state of Maine to the town of Kittery sat in the office of then-Governor Paul LePage.

All other obstacles had been hurdled, all necessary approvals obtained. The only remaining step was LePage’s signature. He never signed it and never offered a rational explanation for refusing to do so.

Now Janet Mills, just sworn in as the new governor last week, has an opportunity to show Maine’s government is fully functional again.

If a lot of Mainers are feeling a renewed optimism in 2019, this illustration might explain why.

John Paul Jones Memorial Park is located in Kittery, Maine’s oldest town and southernmost gateway. The park named after the legendary naval hero sits very close to the site where his ship the Ranger was built during the Revolutionary War.

When visitors cross Memorial Bridge from Portsmouth, New Hampshire, over the Piscataqua River, this tiny park is one of the first places they encounter in Maine.

Unfortunately, what they see is an American flag flying from a rusted pole, paint peeling horribly from several park benches, and interpretive markers obscured by grime.

See, the park is owned by the state, but the state typically doesn’t do much to maintain it. Several years ago, local lawmakers took steps to turn jurisdiction over to local folks who would actually take care of the site.

For a while, Kittery looked after the park under a maintenance agreement, but then the agreement expired. (Town employees still take care of the park’s lawn and trees, however.) 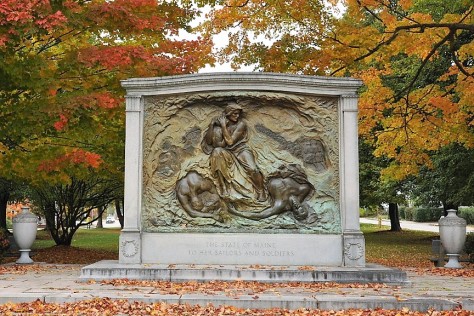 In February 2017, Town Manager Kendra Amaral informed Kittery’s town council she had contacted the governor’s office about the status of the conveyance and was simply told, “No.”

“There was no additional information that was provided to that ‘No,’ as much as I probed and questioned,” she said at the time. “It was just a simple, ‘It will not happen – the governor will not sign the conveyance.’”

Upon hearing this, out of my own masochistic curiosity I contacted the governor’s office as well. I ultimately received the following response from LePage’s senior policy advisor, Lance Libby:

“As you may know the legislation did not require him to convey the property but gave him the ability to do so if he wished to. He has decided not to sign the conveyance at this time.”

I was then told I could write a letter to LePage questioning his rationale for this non-action.

I did so and Libby kindly passed that on. That was nearly two years ago.

I never got an answer.

The closest I came to finding some sort of explanation at that time was a rambling quote from May 2015 when LePage said, “the governor of Maine is going to make sure that every bill that comes down from the House and the Senate with a Democrat sponsor will be required to have a two-thirds vote, because I’m going to veto every one.”

So basically it was all just another example of the Politics of Stupidity, which is what I entitled the column on this topic in March 2017.

Rykerson, Kittery’s House representative in Augusta, was quoted as saying, “Governor LePage doesn’t believe that government works and, once again, he is out to prove it.”

But Rykerson recently shared a personal encounter he later had with LePage, in which the governor told him, “We don’t give things away.”

“What is the market value of a strip of grass and trees that is deeded for public use in perpetuity?” Rykerson asked.

“It’s got to be worth something to somebody,” LePage responded, according to the Kittery legislator.

I always saw this proposed conveyance as an effort by a small community to take on the responsibility of maintaining a highly visible public parcel within its boundaries.

Rather than relying on the state to look after this park – which it has not done well, historically – Kittery wants to do it themselves, in the truest tradition of Maine.

(I have to acknowledge the state last year finally cleaned the bronze portion of a World War I memorial located in the park, and agreed to paint the flagpole this spring.)

In her Jan. 2 inauguration speech, Mills indicated she actually understands the value of putting Maine’s best face forward – which is clearly something LePage never comprehended.

“From now on a sign will greet all those arriving in our state at the Kittery line, and it will say simply, Welcome Home,” the new governor said, resulting in one of the biggest ovations of the evening.

With a mere twitch of her pen, Mills could complete a process inexcusably delayed by her predecessor. And maybe afterward she could visit the state’s oldest town for a ceremony symbolizing the emergence of a new era in Maine.

It could also represent the end of an embarrassing chapter for the state’s residents.