Posted on January 20, 2019 by slothonline Posted in D. Allan Kerr

When I first realized I had broken THE GREATEST SCANDAL IN THE HISTORY OF THE WORLD, I had a hard time believing it myself. Now in retrospect, it seems so obvious I wonder why no one smarter than me already figured it out.

But it seems pretty clear now – the guy sitting in the Oval Office today is not actually Donald J. Trump, Sr.

I don’t have hard evidence to back this up (and in today’s political climate it doesn’t seem proof is required anymore), but I do have a pretty brilliant theory. It goes something like this:

Sometime within the past two decades, Russia either replaced the original Donald Trump with one of its own agents or somehow injected the man himself with a controlling substance that over time alters his appearance and messes with his brain.

I’m still working out the details.

Vladimir Putin’s ultimate goal was to achieve just what’s happening right now – America’s functioning government grinding to a halt and its global stature diminished just as Russia’s is on the ascent.

I probably would have figured it out sooner, but I never paid much attention to Trump until he became a front-runner in the 2016 presidential election.

I vaguely recall him as a team owner in the old United States Football League – right before he led the entire league over a cliff in his crusade against the National Football League.

I then remember something about his marital scandal with second wife Marla Maples, and even then I was focused more on Maples because I thought she was quite attractive.

I’m aware he eventually hosted his own TV show, “The Apprentice,” but since I’m not a fan of reality television I never paid much attention.

Sometimes I would hear of erratic behavior like trying to trademark the phrase “You’re fired” – like he was the first person to utter these words – and similar antics. 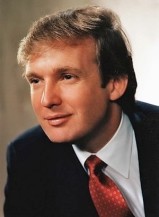 But I do recall the Donald Trump I viewed initially had brownish hair, a vampire-pale complexion and an oddly feminine, pouty mouth. And was of course a bit leaner.

Which is why I was surprised when I saw the 2016 presidential contender Donald Trump, of the tangerine hair, curiously matching complexion, and thuggish countenance. 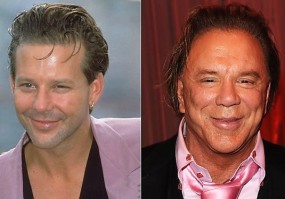 It’s the most startling transformation since the re-emergence of Hollywood bad boy Mickey Rourke, who was actually once something of a heartthrob.

But the transition isn’t merely physical.

Take just 10 minutes and watch old interviews of Trump from the 1980s and ‘90s. Yeah, the arrogance is still there, but you can see him articulate a point by stringing sentences together in a way I would dare describe as coherent. Even if it’s a topic on which you might disagree, there’s a spark of intelligence at work which could be called rational.

You might even catch a glimpse of charm that makes him seem almost likable.

Now match this up to the buffoonish antics we’ve seen over the last four years or so. Not just at his rallies, but during sit-down interviews. You can support him or oppose him, but I don’t know many people who would say this version of the guy knows how to communicate clearly.

He rambles, he repeats the same phrases over and again, his logic shimmies and twirls, and it’s apparent he utters statements before he has thought them thru. Clearly this is not the same man.

Thirdly, there is the question of his sniffles.

I first noticed them during his initial presidential debate with Hillary Clinton in 2016. Trump denied he was sniffling – he claimed he was merely “breathing.” But then he also sniffled during the second debate.

I most recently picked it up a few more times during his address to the nation this month about his border wall crisis. It’s gotten to the point where people have publicly questioned whether his nose issues are the result of past cocaine use, which I think is doubtful.

But I do have two components to my (brilliant) theory – if he was indeed replaced by a double, could the sniffling be a side effect of any plastic surgery required to complete the transformation?

Or, if this is indeed Trump but he’s been victimized by some sort of Russian implant operation – whether thru a mind-control serum or a technological device – could his nose problems result from this as well?

Either supposition might also explain his altered appearance, which goes way beyond the normal aging process. 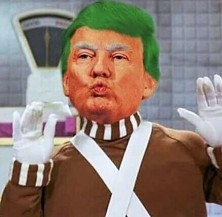 I was baffled during the 2016 campaign when folks would comment on his orangeness but no one thought to explain it. I mean, I can’t imagine he would intentionally want to look like an overfed Oompa Loompa, would he?

One burning question I haven’t resolved is the matter of when this switch might have occurred. The most plausible time frame might have been during Trump’s infamous visit to Moscow for the 2013 Miss Universe pageant.

But since the Russian mafia has been operating out of Trump Tower for more than three decades (a well-documented fact), the deed really could have been accomplished at any time. If anyone could pull something like this off it would be Putin, the former KGB Cold War spy.

Given the recent easing of sanctions against Russia, the proposed withdrawal of U.S. troops from Syria and the absolute chaos engulfing America since Trump’s election, it seems clear any effort by Putin to make this happen has paid off.

And if the original Donald has indeed been replaced, I have no doubt he’s safe and sound in Moscow, still working on plans for a Russian Trump Tower.