Gen. William Whipple wasn’t the most famous patriot of the American Revolution, but he was definitely one of the coolest.

Whipple – seaman, soldier, statesman and signer of the Declaration of Independence – was among several early leaders who backed the power of his pen with the steel of his sword. (That sword, incidentally, is now on public display at Portsmouth’s Moffatt-Ladd House.)

He was not only a member of the fabled Second Continental Congress, but also a brigadier general who served in several campaigns of the Revolutionary War. Before that he was a Kittery, Maine, sea captain.

Most of all, Whipple was the Seacoast’s very own Founding Father, and although he had no surviving children himself it’s fitting we recognize him on Father’s Day today. And it’s even more fitting his contributions will be celebrated in his hometown of Kittery as part of Independence Day. 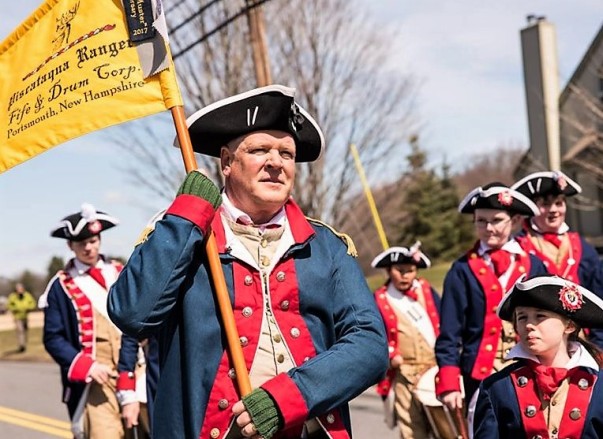 He was a man of principle, and also a man of action.

The Second Continental Congress including some of the great thinkers of our country’s history – Jefferson, Franklin, Adams, and so on. Some were lawyers and doctors, men of high education.

But while John Adams, his cousin Samuel and fellow signer John Hancock all attended Harvard, for instance, Whipple didn’t go to college at all. Instead, he pursued a life of adventure on the high seas as a cabin boy, eventually establishing himself as a ship’s master by the age of 21.

Born in Kittery in 1730, Whipple grew up in the house that still stands at 88 Whipple Road, near the back gate of Portsmouth Naval Shipyard. His grandfather was the renowned shipbuilder Robert Cutts, and his father, also named William, was a sea captain as well.

Whipple earned enough of a fortune to retire from the sea by the time he was 30 years old, settling across the Piscataqua River in Portsmouth and marrying his first cousin, Katherine Moffatt. He prospered as a merchant with his brother, Joseph, and became an early local leader of the revolution.

In January 1776, he was appointed a New Hampshire delegate to the Continental Congress. In this capacity, he was one of three representatives from the state – the other two were physicians Matthew Thornton and Josiah Bartlett – to sign the Declaration of Independence.

In a July 8, 1776, letter Whipple wrote from Philadelphia to his friend John Langdon, the famous Portsmouth shipbuilder: “I hope you’ll take care that the Declaration is properly treated.”

Whipple is the only native of what is now known as Maine to sign the legendary document. Maine was at that time considered part of Massachusetts.

It’s easy to overlook this in hindsight, but in fact the 56 men who boldly signed the Declaration could have easily been signing their own death warrant. They were openly, and very publicly, challenging the king of the most powerful country in the world at the time, an act considered treasonous.

But as if his life wasn’t in enough danger, the old sea captain then laid down his pen and took up his sword. He was commissioned a brigadier general in New Hampshire’s militia in 1777, placed in command of one brigade while the esteemed Gen. John Stark headed the other.

“War with all its horrors is preferable to an inglorious peace,” Whipple once wrote to Bartlett, his fellow Signer.

The general led his regiments during campaigns into Vermont, New York and Rhode Island during the war. He took part in the pivotal victory at the Battle of Saratoga, and helped negotiate British Gen. John Burgoyne’s terms of surrender.

He was then given the honor of escorting Burgoyne and his army back to Boston, where the haughty British commander was shipped home to England.

In poor health, Whipple had to step down from both his military duties and his seat in Congress.

He continued to serve the public, however, and in fact was on horseback riding his circuit as a New Hampshire Superior Court justice when he suffered a heart ailment in 1785. He died a few days later.

In decades past, Whipple was a celebrated icon in the Seacoast. As time passed, it seems our appreciation of the man’s contributions have faded. A school in Portsmouth once bore his name; now it’s a condo building.

And in Kittery, where he was born and raised, it appears there has been no formal celebration for the Declaration of Independence for 100 years.

But at 9 a.m. on Saturday, June 29, the general is scheduled to “return” to his hometown and kick off the week of 4th of July celebrations by reading from the declaration he signed in 1776.

The Piscataqua Rangers Junior Fife & Drum Corps will be on hand to perform the national anthem and living historians from Capt. Henry Dearborn’s Company in Epping, New Hampshire, will fire muskets in celebration.

Refreshments will be served afterward at the neighboring Kittery Historical and Naval Museum.

If you happen to miss this event, the Moffatt-Ladd House, where Whipple and his wife lived throughout the revolution, is now an historic landmark open to the public from June to October. You can check out the sword this Founding Father carried as he fought for our nation’s independence.