Posted on December 15, 2018 by slothonline Posted in D. Allan Kerr

I have to admit, I never really got the Nancy Pelosi thing. I just bought into her caricature as a flaky San Francisco liberal who embodied the Democratic disconnect with the working class. 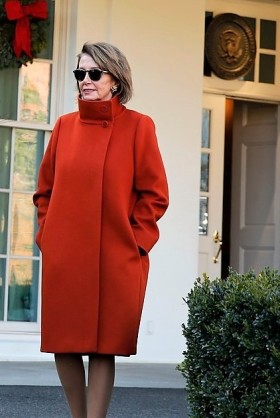 That was before she strolled onto Donald Trump’s home court this week, beat him up in front of the whole school, and took back her lunch money.

Then she slid her shades back on and exited the White House in a Quentin Tarantino-worthy, slow-motion strut somebody somewhere has to put to some classic ‘60s tune.

(My recommendation – “These Boots are Made for Walkin’,” by another Nancy named Sinatra.)

It was an amazing performance from someone who little more than a month ago was so toxic many of the Young Turks of her own party – like Maine’s Jared Golden – won their seats only after distancing themselves from her. Pelosi might have proven, once again, sometimes the best man for the job is a woman.

If you haven’t yet seen video footage of the Oval Office session with Pelosi, Trump and the Senate’s leading Democrat, Chuck Schumer, then take 15 minutes to check it out. But do so remembering the backdrop of Trump threatening to shut down the United States government if Congress doesn’t pay for his wall.

I’m going to repeat that – Donald Trump threatened to shut down the U.S. government if Congress doesn’t pay for his wall.

You may recall Trump promising us, repeatedly, his wall was going to be funded by Mexico. Remember the mantra?

Shockingly, Mexico decided not to go along with Trump’s plan. So now he wants you and me to pay for his wall, and he wants to shut down the government if he doesn’t get his way. Meanwhile our national debt is soaring and he wants to deny federal employees a cost-of-living increase due to budget constraints.

So this session with Pelosi and Schumer was supposed to be a simple photo op before they sat down to discuss some legislative issues. Then Trump started talking about his wall.

Initially, Pelosi attempted to be diplomatic, saying, “I don’t think we should have a debate in front of the press.” But Trump wanted to keep on going.

So Pelosi figuratively shrugged her shoulders and figured, “Okay, let’s do this bitch.”

First she called Trump’s bluff when he claimed he could get funding for his wall passed in the House of Representatives “in two seconds.” She told him the votes aren’t there. He continued to insist he was right.

“You will not win,” she told him. Trump again claimed he had the support needed in the House, but not the 60 votes he needs in the Senate.

“Then let’s take the vote and we’ll find out,” Pelosi said.

Trump promptly retreated to the broader issue of border security.

Later on, he tried to diminish Pelosi’s role at the negotiating table.

“Mr. President, please don’t characterize the strength that I bring to this meeting as the leader of the House Democrats who just won a big victory,” she replied. She was of course referring to the nearly 40 seats her party picked up last month to win the House majority. 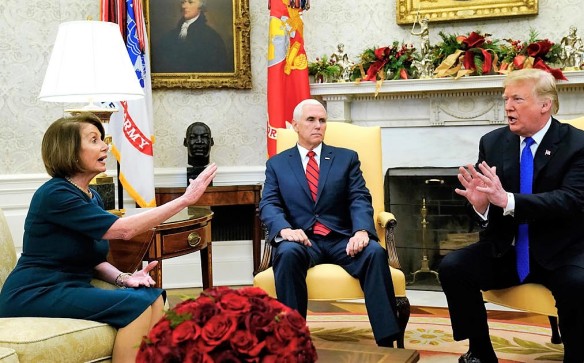 Then she called out Trump’s lies to his face, pointing to cue cards he had beside him.

“What the president is representing thru his cards over there are not factual,” Pelosi said. “We have to have an evidence-based conversation about what does work, what money has been spent, and how effective it is.”

“We don’t want to have that mischaracterized by anyone,” she added. “So let us have a conversation where we don’t have to contradict, in public, the statistics that you put forth.”

According to media reports, while Pelosi enjoyed her victory strut from the White House after the meeting, Trump had a temper tantrum inside where he flung papers across the office.

Say what you want about the woman, but after watching Republican men flagellate themselves publicly in front of Trump for the past two years it was nice seeing someone give it right back to him. I didn’t realize she had that kind of fire.

I guess I should have. Both her father and brother served as mayor of Baltimore, Maryland, so politics is in her genetics. She became the first female Speaker of the House back in 2007, making her the highest-ranking female politician in American history. (The speaker is next in line to the presidency after the vice president.)

And now it seems she’s poised to reclaim her title after some of these Young-Turk Democrats claimed it was time for new leadership. Pelosi – who I was surprised to learn is 78 years old – openly dared someone to step up and challenge her.

“Come on in, the water’s warm,” she said in November.

No one took her up on it, and this week Pelosi negotiated a term-limit agreement with the rebels which sets her up to take control of the House again in January. Now she can wind up as the oldest speaker in history, as well as the only woman.

“Over the summer, I made it clear that I see myself as a bridge to the next generation of leaders,” she said.

Based on her command performance this week, I think the next generation could learn a lot from old Nancy.

D. Allan Kerr is happy to see the feisty spirit of John McCain lives on – even if it’s thru a liberal, San Francisco grandmother.